The award winners in Zagreb

10 March 2019 – The 4th Croatian Women of Influence & Future Leaders Awards have been held at a gala event on International Women’s Day Friday, March 8th, in Zagreb.

The main speakers at the conference were Ana Mandac, assistant Minister of Economy, Entrepreneurship and Crafts, gynecologist Ulla Marton, and Rose Studer-Babić, owner and editor of the portal Moj Domovina. Mina Petra, an ethno designer and director of Croatia House, spoke about the project of employment of women in rural areas of Croatia.

The Croatian Women of Influence Award recognises leadership, innovation and community impact of women of Croatian ancestry. 19 winners were selected out of 63 nominations representing Australia, Bosnia & Hercegovina, Croatia, Switzerland and the United States of America.

Winners of this year’s awards

Ankica Kovač, an Assistant Professor at the Faculty of Mechanical Engineering and Naval Architecture in Zagreb, first made a hydrogen bicycle, and now is the head of the first electric vehicle charging project.

Former consultant Danijela Balikić, turned around her career in her 50s and founded a pharmacy company with the ‘Made in Croatia’ label. “It’s never too late for success, said the returnee from America and Sweden, you just have to have a vision and believe that you can do it”.

Actress Sanja Drakulić launched the Duart European Actors Platform for the promotion of actors on the world market, whilst successful businesswoman Damjana Domanovac, a former registrar in Samobor, whose franchise for a specialised travel magazine Place 2 go is sold in seven European countries, admitted she began to enjoy life after she found her calling. Today, she successfully combines motherhood, work and her great passion.

Among the winners is one of the leading marketing experts in Croatia, Hedda Martin Sola, the author of the first Neuromarketing book in Croatia, “Marketing Weaponry” and “Neuromarketing Armouries”, which are being studied at faculties and sold in Europe and the United States.

“It is not important to just start and open a business, it is important that your business affects the environment,” said Cleveland-based Biljana Lovrinović, who opened the IT company Galop Digital in her native Travnik. She is a member of ACAPA, a Croatian-American Association of Experts, which recently opened a branch office in Zagreb.

This brings the overall number of award winners to 94 selected from more than 230 nominations received from Croatian diaspora communities from around the world.

CWN/MHŽ founder Caroline Spivak said women should be encouraged in all areas of work, whether in economics or entrepreneurship, medicine and science, technology and economics, or culture and art. She said that women must encourage other women because it would strengthen their position.

“Women everywhere in the world positively influence all areas of life, as evidenced by our winners. But there is still a great gap. On the one hand, women have the ability for success without restriction, and on the other hand, they have no rights such as equality in education, health care, no right to vote, no right to inheritance, and representation in state, court and similar bodies,” she said, before adding that the winners of this award position and brand Croatia on the world map.

The conference was held under the auspices of the president of Croatia Kolinda Grabar-Kitarović, the Croatian Heritage Foundation, Ministry of Economy, Entrepreneurship and Crafts, Ministry of Tourism, Ministry of Science and Education, Central State Office for Croats Abroad, Croatian World Congress, Croatian Tourist Office, Grad Zagreb, Zagreb, Zagreb Archdiocese and the Zagreb Tourist Board. 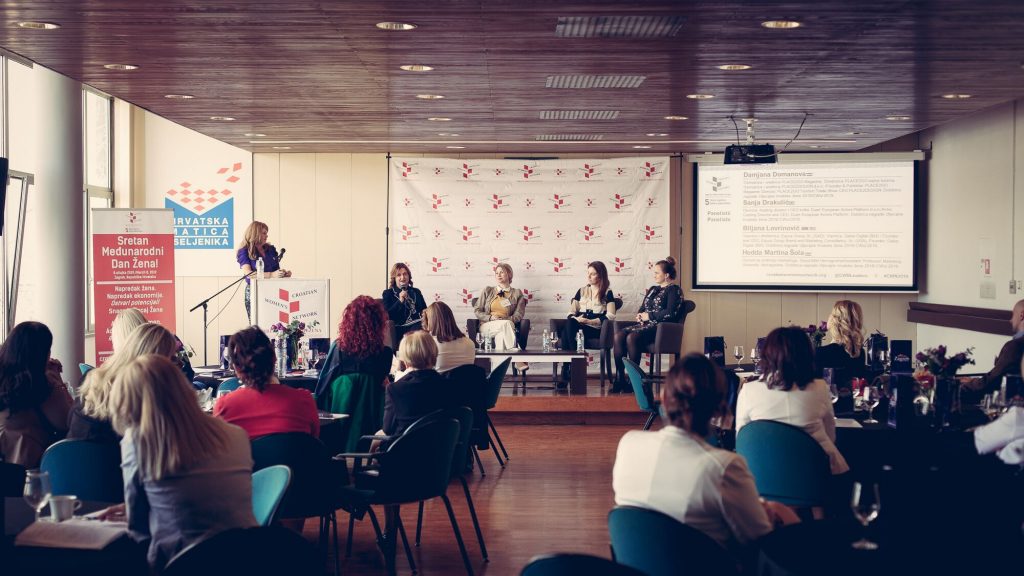 CWN/MHŽ was formed 5 years ago in Toronto and is a global forum that celebrates, champions and connects distinguished women of Croatian ancestry from around the world who work together to inspire and support each other. The Croatian Women of Influence and Future Leader Awards honours their achievements.